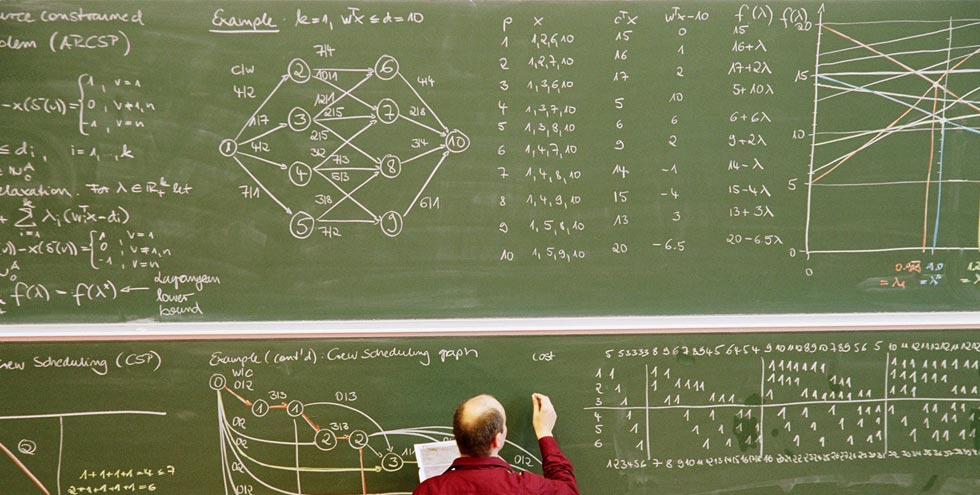 The purpose of this biannual scientific colloquium is bringing together mathematicians, scientists, and engineers to enjoy a series of talks on one topical issue of current or emerging interest to several fields within mathematics. The colloquium intends to foster scientific communication within ECMath and beyond.

Abstract:
Large scale structured optimization problems naturally appear in the modeling of many scientific and engineering situations. To meet the challenges posed by these issues, considerable efforts have been devoted in recent years to the study of first-order splitting algorithms. The forward-backward algorithm, (also called the proximal-gradient algorithm) which is one of the most important, is a powerful tool for solving optimization problems with a additively separable and smooth plus nonsmooth structure. It is a natural extension of the gradient-projection algorithm. In the convex framework, a simple but ingenious acceleration scheme developed by Nesterov [1] and Beck-Teboulle [2] improves the theoretical rate of convergence for the function values, in the worst case, from the standard O(k-1) down to O(k-2). The recent results by Chambolle-Dossal [3] and Attouch-Peypouquet [4], see also [5], show that the convergence rate of a slight variant of this accelerated forward-backward method, which produces convergent sequences, is actually o(k-2), rather than O(k-2). In this lecture, we will give an overview of the convergence rate of these algorithms, and show that they are robust with respect to perturbations, errors. Our arguments are based on the connection between these algorithms and a second-order differential inclusion with vanishing damping, recently introduced by Su, Boyd and Candès [6], and studied extensively in [7]. Linking algorithms with dynamic systems provides connections to many different fields of mathematics: mechanics, PDE's and control, algebraic and differential geometry to name a few, and a valuable guide for the proofs. The key point of the mathematical analysis is the introduction of energy-like Lyapunov functions, with adapted scaling. We show that the introduction of additional geometric assumptions on data, or adaptive control (Hessian-driven damping, restart) leads to even better convergence rates. Finally, we show recent progress in extending these results to more general equilibrium problems, which consist in finding zeros of maximal monotone operators. In doing so, beyond convex minimization problems, we can adress convex-concave saddle value problems, and fixed points of non-expansive operators. Applications are given in sparse optimization for signal/imaging processing, and inverse problems.

[3] A. Chambolle, C. Dossal, On the convergence of the iterates of the “Fast Iterative Shrinkage/Thresholding Algorithm”, Journal of Optimization Theory and Applications, 166 (2015), pp. 968--982.

Abstract:
In this talk we plan to address two topics in the field of optimization methods for nonsmooth problems that my group has worked on recently. In the first part we discuss methods for minimizing functions that are the sum of a possibly nonconvex smooth function and a convex lower semicontinuous extended real-valued function. Problems of this form arise in various fields such as compressed sensing, big data, and machine learning. The developed class of algorithms combines a fixed-point type iteration with a semismooth Newton approach to obtain a globally convergent method that can achieve superlinear local convergence. The proximal operator plays an important role in these methods. Variants of the approach that can solve generalized variational inequalities as well as extensions towards stochastic versions of the method will also be touched upon. In the second part we address the numerical solution of multi-parametric variational inequalities by low-rank tensor methods. Problems of this form arise, e.g., for variational inequalities under uncertainty. A strong challenge consists in the very high dimension of the discretized parametric state, which is represented by a huge multi-dimensional array (i.e., a high-order tensor) and the fact that each tensor entry has to satisfy an individual inequality constraint. We discuss solution methods that use low-rank tensors to make the problem tractable. The development of numerical methods is involved since only a quite limited number of tensor operations is efficiently available within the low-rank tensor format and, in addition, the tensor ranks must be controlled suitably. The talk builds on joint work with Sebastian Garreis, Andre Milzarek, and Zaiwen Wen.
Abstract:
We review old and new results on solutions to some classes of unilateral type problems for linear and nonlinear partial differential equations and systems of first order. We include obstacle type problems for transport equations and systems, first order problems with gradient constraints and an obstacle-mass constrained problem for a scalar conservation law. These problems are motivated from examples in polyphasic flow in porous media, in population models, in the transported sand piles problem and in superconductivity.