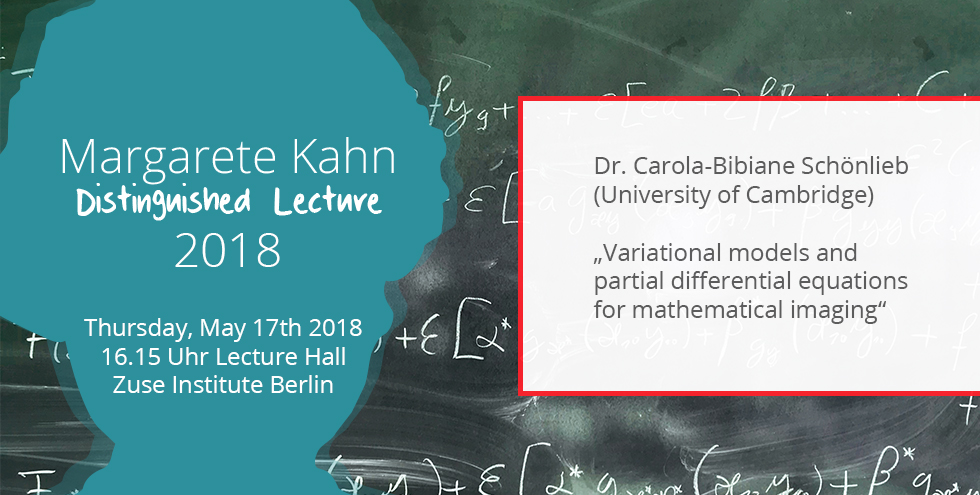 The Margarete Kahn Distinguished Lecture features distinguished female mathematicians from all areas of mathematics. The lectures will take place once each term. According to the topic, it will be hosted by one of the five ECMath institutions FU Berlin, HU Berlin, TU Berlin, WIAS, or ZIB.
We warmly welcome not only senior scientists, but in particular also students and post-docs.

This distinguished lecture series is in line with our endeavour to promote career paths in mathematics especially for talented female students and scholars by featuring successful female mathematicians, and thereby showcasing role models for current and future generations. It is set up to honor Dr. Margarete Kahn, an excellent mathematician, whose scientific career was denied her as a woman.

Carola-Bibiane Schönlieb is a Reader in Applied and Computational Mathematics at the Department of Applied Mathematics and Theoretical Physics at the University of Cambridge (UK). There she heads the Cambridge Image Analysis Group, is Director of the Cantab Capital Institute for the Mathematics of Information and of the EPSRC Centre for Mathematical Imaging in Healthcare, and a Faculty Fellow of the Alan Turing Institute.


Abstract:
Images are a rich source of beautiful mathematical formalism and analysis. Associated mathematical problems arise in functional and non-smooth analysis, the theory and numerical analysis of partial differential equations, harmonic, stochastic and statistical analysis, and optimisation. Starting with a discussion on the intrinsic structure of images and their mathematical representation, in this talk we will learn about variational models for image analysis and their connection to partial differential equations, and go all the way to the challenges of their mathematical analysis as well as the hurdles for solving these - typically non-smooth - models computationally. The talk is furnished with applications of the introduced models to image de-noising, motion estimation and segmentation, as well as their use in biomedical image reconstruction such as it appears in magnetic resonance imaging.

Margarete Kahn was a German mathematician and Holocaust victim. She was among the first women to take up studies at a university and to obtain a doctorate in Germany.

She studied mathematics, physics and propaedeutics in Berlin and Göttingen. Supported by the University of Göttingen and Felix Klein, Margarete Kahn obtained a doctorate in 1909 under David Hilbert in Göttingen. With her dissertation Eine allgemeine Methode zur Untersuchung der Gestalten algebraischer Kurven (A general method to investigate the shapes of algebraic curves), she contributed to David Hilbert's sixteenth problem.

Since women were not admitted for habilitation before 1920, she wasn't allowed to persue a scientific carreer. Instead, she became a schoolteacher. After obtaining jobs in Katowice and Dortmund, she had been working as a teacher for secondary schools in Berlin-Tegel since 1929.

As a Jew, she was dismissed from school in 1936 and was forced to work as a factory worker at the Nordland Schneeketten (Nordland snow chains) factory. On 28 March 1942, Kahn was deported to Piaski and is considered missing since then. 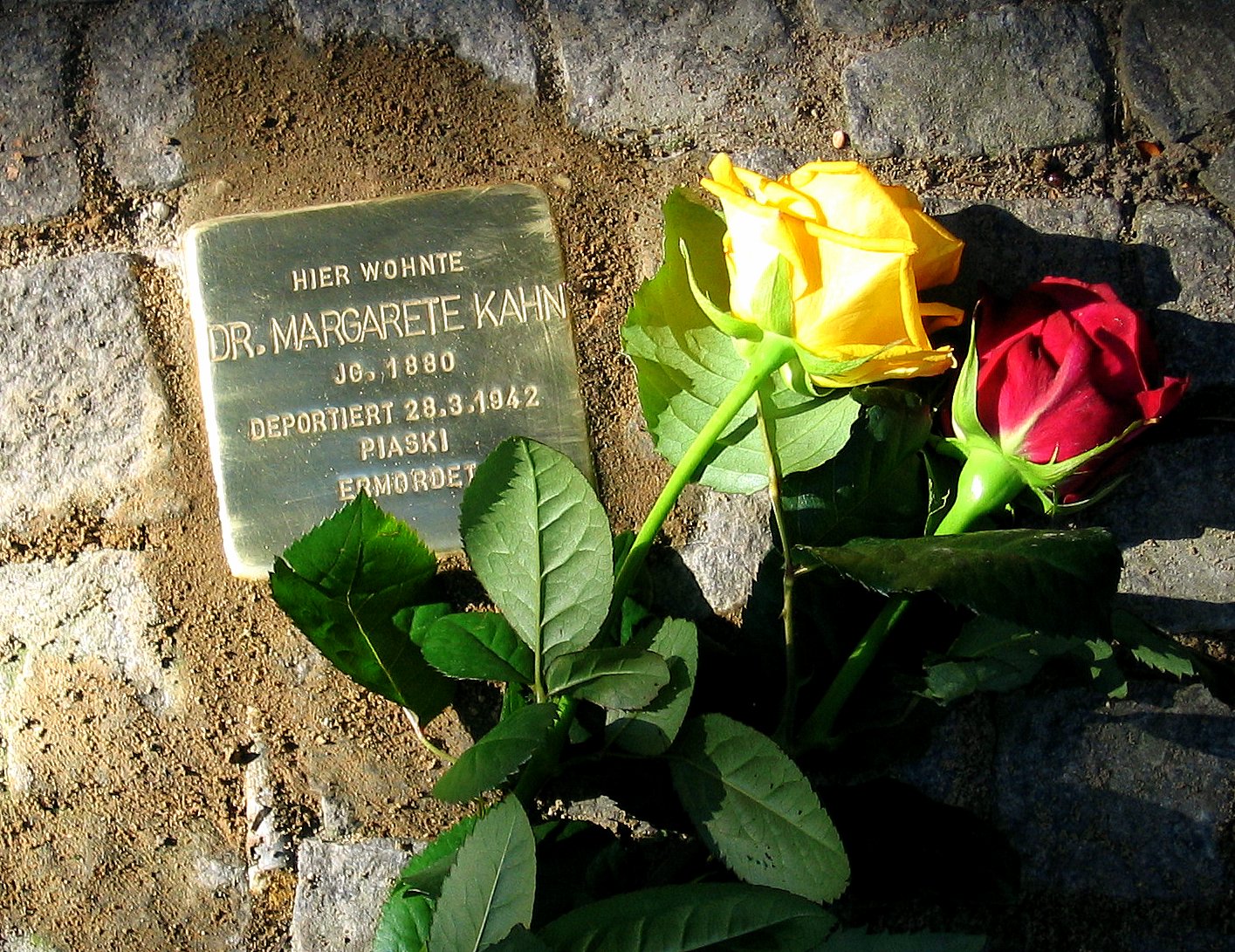 In memory of Margarete Kahn, a Stolperstein was laid in front of her Berlin home in Rudolstädter Straße 127 in Berlin-Wilmersdorf, on 13 September 2008.

This was part of a Year of Mathematics initiative by the mathematician, school teacher and tourist guide Iris Grötschel together with the Research Center Matheon, to commemorate Berlin mathematicians who were persecuted and murdered by the Nazis from 1933-1945.

Stolpersteine (stumbling stones) is a project of the artist Gunter Demnig.